skip to main | skip to sidebar

Is It Happy Hour Yet? Somewhere?

Oy, such a day I've had of it. And I'm nowhere near done.

Got up at 6:30 after a very restless night's sleep (Baboo being sick and me fearing swine flu).

Stopped by the grocery store on the way home.

Called doctor's office across the street to schedule Baboo a look-see. Got an appointment for 12:30.

Now 9:15. Ran over to see The Spouse and bring him clean clothes. Stayed until about 11:00, then came back home.

Checked email, called the insurance company, tracked down some needed documents before running out the door (late) for Baboo's appointment. 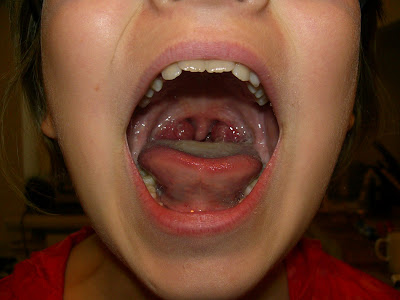 Met the Fabulous Dr. M who first treated The Spouse. He checked out Baboo, diagnosed strep, not swine flu, and sent us home with horse pill antibiotics. So glad I didn't just go to the pharmacy and mime that I wanted anti-viral meds!

Largely because I couldn't remember "Tamiflu." All I could think of was "Theraflu."

In an attempt to nurture myself a little, I am now roasting a gorgeous big, fat chicken with clementines and butter and garlic and parsley under the skin. And I made a big pot of potato soup.

I'm sure the kids will shun both.

While at the hospital this morning, The Spouse reported that he was told that there was NO WAY he'd be sprung on Wednesday. He needs to be in for at least a total of ten days.

The last I heard the doctors seem to think sitting at a desk and flying in planes are the culprits. Not sure how to get around either of these things either.

I guess all will be revealed. 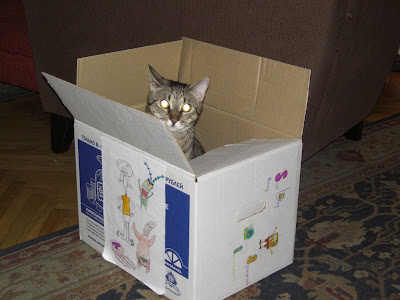 Basement Cat Cat-O Is in the Box 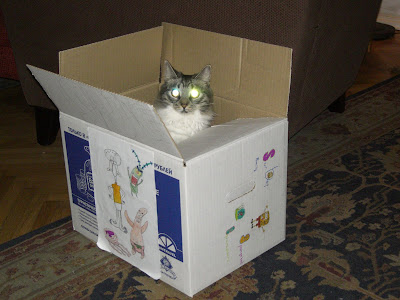 Now Basement Cat Crooky Is in the Box.

I still get to run back to school in time to collect Skittles at 5:30. Then I can relax.

UPDATE: The Spouse reports the tentative release day is back to Wednesday. That's day-after-tomorrow Wednesday!!!
Posted by The Expatresse at 3:06 PM

Amanda, strange that sitting at a desk could be the culprit of the thromobis issue, but that he cannot exercise / walk. Seems contradictory.. Are they going to put him on Coumadin long term? If so, you might want to research oral anticoagulants, as there are some new ones "out there".. just a suggestion..

I think the "no exercising" is short term as he gets very winded right now . . . thin blood isn't very efficient. The GP today said something about easing back into a routine, so that makes more sense.

You know in Greece they keep patients in the hospital way longer than necessary..course here they have you in and out so fast you dont know what hit you!
Continuing to hope for the best for your family:)

You have every reason to sit down with a tall glass of wine!

That's a long stay in the hospital. Here in the States, he'd already be home. Is it at the EMC? Good to hear that you are so impressed with the medical care.

Those tonsils look nasty. Better strept than the swine flu.

Hell, here they do pacemeakers on an outpatient basis! Shocking eh?

I think it's good that they are keeping him in for a good long rest as otherwise he'd be up to his old tricks again!

Well they say that on airplanes you are supposed to get up and walk around quite a bit for your blood circulation... maybe they will want him to get up from his desk every hour and walk around the office a bit...
Poor Baboo! Thankful it's not flu though! But now you must watch for strep everytime she gets a cold or sore throat... ugh...

Too much walking for you my dear... you will not have to go swimming or to a gym with all of that walking!

If Ron takes a gypsy cab to work could he take the girls to school in one too?

Skittles' Bitty Baby came today and is very, very sweet and she has several outfits... Now I am on to Baboo's next...

Hope you all get back to normal soon... I realize it has been really hard on you with all of this running around! xov

Hope your husband will feel better soon.
It does seem contradictory to me too that doctors do no recommend walking. Seems to me that walking is most benign of exercises.
Best wishes!
Olga

That pic, it's just...National Geographic! I can safely say no more.

How are Baboo and your husband doing? Hope he's not going stir crazy with his forced bedrest. Knowing the long hours that lawyers work, does he know how to do nothing? I'm sure he's catching up on his reading (for pleasure).

My countdown to takeoff for Moscow is approaching.

Sounds like you're managing. Thank you for keeping us up to date. I'm sure you're overwhelmed with information, but I found this article very informative and clear: http://www.emedicinehealth.com/blood_clot_in_the_legs/article_em.htm

Hopefully your house is on the mend!..more mended than not, by now.

My blog is listed in the Big Blog Collection

The Beet Goes On

Promote Your Page Too

More Ways to Waste Time (But Worth It, I Swear!)

How Much Is My Blog Worth?